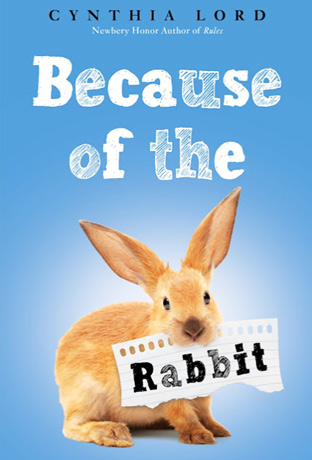 Because of the Rabbit

I was so excited to invite Iris, Leah, and Jack to my house. We'd have fun and they'd fall in love with Lapi, just like I did. After all, who wouldn't want to spend time with a cute rabbit?

He'd be my furry secret weapon!

On the last night of summer, Emma tags along with her game warden father on a routine call. They're supposed to rescue a wild rabbit from a picket fence, but instead they find a little pet bunny. Emma convinces her father to bring him home for the night.

The next day, Emma starts public school for the very first time after years of being homeschooled. More than anything, Emma wants to make a best friend in school. But things don't go as planned. On the first day of school, she's paired with a boy named Jack for a project. He can't stay on topic, he speaks out of turn, and he's obsessed with animals. Jack doesn't fit in, and Emma's worried he'll make her stand out.

Emma and Jack bond over her rescue rabbit. But will their new friendship keep Emma from finding the new best friend she's meant to have?

Newbery Honor-winning author Cynthia Lord has written a beautiful and sensitive book about being different and staying true to yourself.

"There are warm-hearted moments and close family ties showcased throughout, and there are enough story angles to capture the interest of many different types of readers."  School Library Connection

"The many strands of Emma's story, shaped by her self-reflection, courage, and kindness, converge in the satisfying conclusion.  Lord, who wrote the Newbery Honor Book Rules (2006), uses clear, straightforward sentences to relate experiences in ways that speak directly to children."  Booklist (starred review)

"Home-schooled by her mother, young Emma is very close to her parents and brother. But now Emma's life is changing. She decides to quit home schooling and enter the fifth grade. She learns about honesty, integrity, and friendship when she finds a lost rabbit and starts school for the first time. Emma and her [family's] Franco-American heritage [is] a rarity in children's literature. Delightful."  Kirkus Reviews (starred review)

"A timely story which hits on current social issues in an honest and believable manner."  School Library Journal